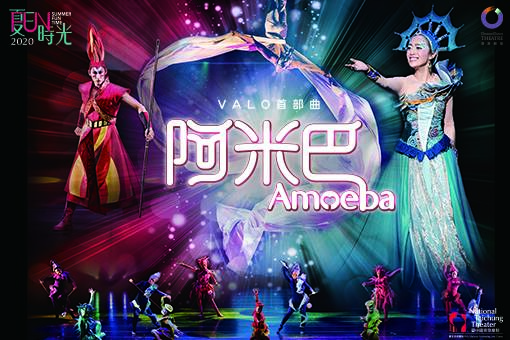 The amoeba signifies the purest, untainted, original heart of life, through the eyes of which we see a beautiful new world of life.

In the primordial chaos of creation, Mother Earth created the amoeba out of converging lights and forces. As the new amoeba basked in the moonlight, the people celebrated its arrival. Yet not all were pleased: volcanic fires and torrential winds lunge to challenge the newcomer. Undaunted, and under the gentle guidance of Mother Earth, the amoeba faces these challenges, bearing the hopes and loves of all creation.

VALO I - Amoeba is the magnum opus of Diabolo Dance Theatre, a company renowned for its unique mastery of the diabolo, or Chinese yo-yo. Fusing traditional artistry with song, dance, drums and multimedia, Amoeba blends physical and virtual realms in a highly acrobatic performance full of imagination and surprise.

Diabolo Dance Theatre was founded in 1986 with the simple goal of spreading happiness. Centered on the diabolo, a group of young artists came together to explore its theatrical and creative possibilities, forging a new and unique performance art that defies the imagination. Even after more than a thousand performances in more than 30 countries, Diabolo Dance Theatre still keeps its founding mission of happiness dear to its heart, spreading joy to audiences across geographical and linguistic boundaries.

100 minutes, including a 15-minute intermission.

※100 minutes, including a 15-minute intermission.

※Please arrive early for the performance. Latecomers may not be admitted.

※ For audiences of all ages. One person per ticket.