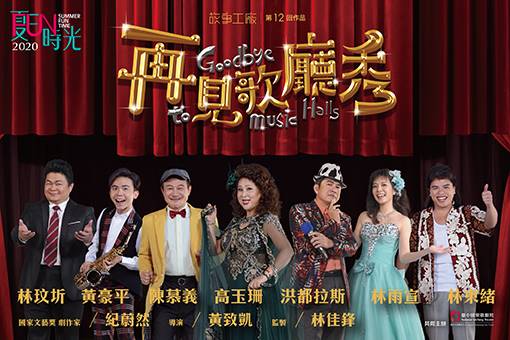 Goodbye to Music Halls is brought to you by award-winning playwright CHI Wei-jan, director HUANG Chih-kai and producer LIN Chia-feng.

During the 1970s and 80s, music halls were a staple in Taiwanese pop culture, a rare blossom during the oppressing rule of martial law. Yet as many bans were lifted, music halls started to become a thing of the past as well. Wu-ge, the boss of a once popular music hall, decides to take his last chance. He recruits his son A-yang, who is studying in the US, to run the new show. This spells trouble for the show's style, and as the Taiwanese mafia and a backstage love affair become entangled with the production, the show faces a crisis. But A-yang insists: The show must go on! This will be the music hall's last hurrah, and the entirety of Taiwanese pop culture in a nutshell.

CHI is a graduate of the Department of English Language and Literature of Fu Jen University, and holds a PhD in English Literary Studies from the University of Iowa. A widely renowned playwright, he is currently professor emeritus at the Department of Drama and Theatre of National Taiwan University, and was a recipient of the 2013 National Award for Arts. His nearly two dozen plays include Metamorphosis, Shakespeare at the Mahjong Game, and The Story of Anna and Chi.

A member of the first graduating class of National Taiwan University's Department of Drama and Theatre, HUANG likes to view life through the wacky perspective of a funhouse mirror. His kaleidoscopic work in the theater is notable for its distinctive visual style, and for pushing characters to their dramatic limits to highlight human values and emotions. He lives by his motto, "Turn the world into what we like." He has directed numerous productions for Story Works, including The Moon is Always Full, Sakurako's Choice, The Long Goodbye, and The Way of Zhuang Zi.

Story Works is a theater company dedicated to producing original Taiwanese stories. Fueled by a passion for the stage, the company makes it their mission to make each one on-stage moment of heartfelt feeling and surprise, and to craft living, breathing stories in the theater. Past productions include Three Storytellers, Unspoken, The Long Goodbye, Sakurako's Choice, and The Moon is Always Full.

Performed in Mandarin and Taiwanese, with Chinese surtitles during Taiwanese dialogue.