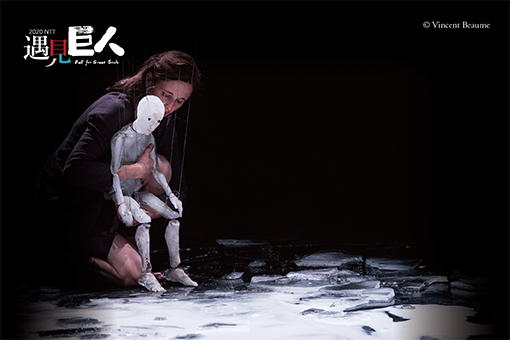 Due to the global impact of the COVID-19, some of the artists and performance groups from abroad are unable to participate in Fall for Great Souls series as scheduled. We hereby announce the cancellation of this program.

Anywhere is freely inspired by the novel Oedipus on the Road by francophone Belgian writer Henry Bauchau. In this retelling of the greek tragedy of Oedipus, Théâtre de l’Entrouvert have crafted an intimately emotional experience with their artistry in minimalist visuals and ephemeral materials. As mist, fire and light ritualistically swirl in the pitch-black of the stage, the ice puppet of Oedipus stumbles upon his final journey with his daughter Antigone, portrayed by an actress. With each touch and interaction, the ice puppet gradually melts and transcends its physical form, a direct depiction of the protagonist’s inner travels and travails.

Elise Vigneron is a graduate of the École Nationale Supérieure des Arts de la Marionnette (ESNAM), France’s leading institution in the art of puppetry, where she majored in plastic arts and attended drama classes. After she received her diploma in 2005, her interest in spanning different art forms led to collaborations with artists from multiple disciplines, and she continues to build upon these experiences in exploring the creative unknown. Her 2016 work Anywhere brings a richer metaphor to the classic story of Oedipus in its use of the transformation of ice into water.

Extract from / Oedipus on the Road by Henry Bauchau

Performed in French with Chinese surtitles.

※Only one discount may apply per purchase.
※Tickets purchased as a ticket package can not be individually returned or exchanged.

※The auditorium opens 10 minutes prior to the performance time. Latecomers will not be admitted.