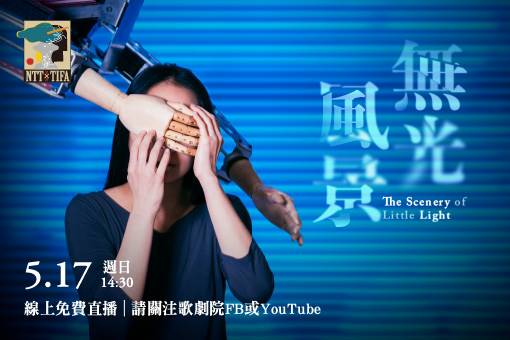 Suddenly, from all the green around you,

Something, you don't know what, has disappeared;

you feel it creeping closer to the window,

in total silence. From the nearby wood   - Before Summer Rain, Rainer Maria Rilke

WANG Lien-cheng the NTT Artist-in-Residence, and his co-creation partners’ new work leverages a combination of technology and body movement to explore various prospects of digital aesthetics and kinesics. To address human struggle, both human and robot are put on stage. As the former constantly struggles for balance under the influence of the latter, finding it increasingly harder to keep control, the entire system would reach an edge of extremes.

WANG Lien-cheng is a digital artist whose works stretch across interactive devices and sound performance. He is committed to creating a seamless combination of images and sounds created by computer algorithm. He was awarded 1st Price of Interactive installations of Digital Art Festival Taipei in 2009. He was the winner of 3D/Sculpture Award of the Lumen Prize in 2017 (U.K.). His works have been exhibited and performed at multiple world-class art festivals including Les Journées GRAME (France), CONCIERTOS AUDIOVISUALES MADATAC, Círculo de Bellas Artes (Spain), OSTRALE´O16, Dresden in 2016 (Germany), UPDATE_6, Ghent in 2016 (Belgium), Linz Ars Electronica (Austria), etc.

CHEN Yow-ruu received her MFA degree in Theatre Directing from the Taipei National University of the Arts. As a theatre artist, her works often integrate with a locale to recall a long-forgotten memory or uncover a piece of history by employing methods such as sound, image, installation, and live performance. She was once stationed in Akiyoshidai International Art Village in Japan, Siao-Long Cultural Park, and Treasure Hill Artist Village.

As a freelance artist, Ms. Tien builds her creative power in daily life, explores ways to express emotions through body motions, and searches patterns of a way out in life. Her work The Hole was nominated for Taishin Arts Award in 2015. In 2016, she was selected by the Ministry of Culture of Taiwan for the artist residency program in Paris. In 2018, She was funded by the Cloud Gate Art Makers Project, and bestowed the Luo Manfei Dance Grant the same year to participate in an international exchange event titled TIME-PLACE-SPACE: NOMAD in Melbourne Australia.

HUNG Shiau-ting has a bachelor’s degree at the Department of English Literature in National Dong Hwa University, and subsequently another degree in General and Comparative Literature at Sorbonne Nouvelle- Paris 3, France. She then continued her Master’s degree and Ph.D. in the same institute. She endeavors to construct dialogues between different discipline and context, and discusses the implication of the construction and distortion of virtual identities in a text. Such can be seen in her works of play, movie, and other cross-disciplinary text.

KAO I-hua has a bachelor’s degree at the Department of Foreign Languages and Literature, National Taiwan University, and a Master’s degree in lighting design at Carnegie Mellon University. She once served as the stage manager of Novel Hall for Performing Arts and the theatre consultant of National Kaohsiung Center for the Arts. She is now an adjunct lecturer at the Department of Theatrical Design and Technology, Taipei National University of the Arts, and a board member of the Taiwan Association of Theatre Technology.

LIAO Yin-chiao has an MFA NYU Tisch School of the Arts Design for Stage and Film and a bachelor’s degree in the Department of Drama and Theatre, National Taiwan University. She is now a freelance designer for stage and film. In recent years, she has ventured on design of exhibition hall and other crossover spaces.

WU Ping-sheng majored in sculpture design in college and devoted himself to new media arts in graduate school. He works on a variety of forms of art practices related to sound such as sound installation, film music composing, and theatre. He is passionate about live performances and sound installations.

※ Please arrive early for the performance. Latecomers may not be admitted.